How Spain Won the World Cup 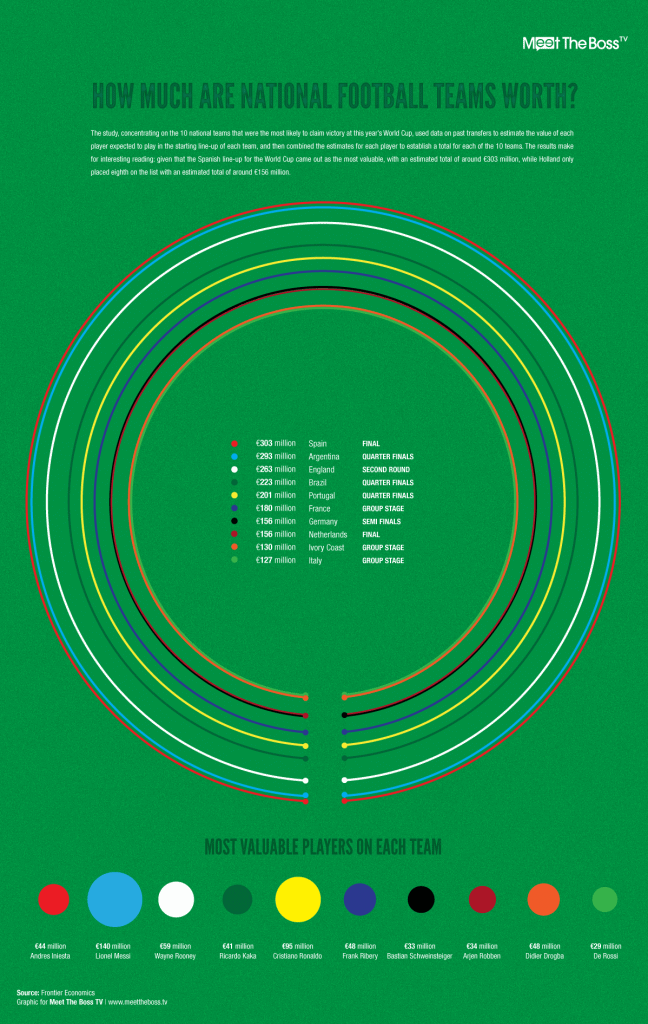 Just kidding, the octopus was lucky! If you’re really looking for my opinion on why Spain won, I will gladly give it. A combination of an overly ambitiously dutch team and one too many kung-fu moves.

That should have been a red card by-the-way. Anywho, as much as I wish Holland could have finally won their first world cup, it was just not meant to be this year. I hope that in the next four years we Americans will grow to appreciate soccer more. If we could get more of a national backing, no telling how good we could be. I’m sure if US soccer/football did receive a surge of fans, our overall team value would skyrocket.

What is team value you ask? Well, that’s exactly what’s represented in this infographic! By studying past player trades, Frontier Economics was able to put a price on each starting player’s value. Now with this information one could argue that Spain won because they are valued twice as much as Holland. This is entirely true. After conducting my own experiments and studies, I have concluded that money decides everything. Spain practically bought-out the whole World Cup from the beginning. With their 44 million Iniesta and no telling how much Sergio is worth – the Netherland’s mere 34 million euro Robben just wasn’t pricey enough to win.

Okay I’ll shut up now. All-in-all, good game Spain. There is a pinch of me that thinks Spain deserves it a bit more than Holland. By the way, enjoy your 19 Karat World Cup trophy that isn’t even a cup. Here’s your graphic. [Via]

Dare To Grow Your Business With Video Marketing