Mapped: The Richest People In History 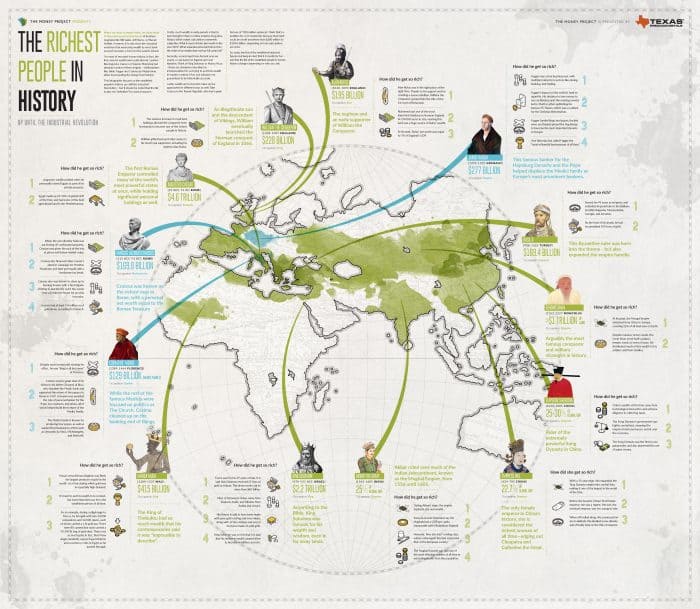 Do you ever stumble upon information about the world’s wealthiest people and wonder how they become super successful?

Nowadays, it’s well-known that most of the world’s billionaires obtained their staggering amount of money by investing or inventing. Others, like the Koch Brothers, inherited large sums and managed to increase their wealth through proper management.

On the other hand, you’re probably not as familiar with how people have historically become rich. Read on and find out in today’s infographic.

Can you imagine a person living in a time before Jesus Christ and having a personal net worth equal to the Roman Treasury? Marcus Licinius Crassus, who is thought to be the richest man in Roman history,  a man that earned his wealth in a pretty shady way.

He rose to riches by purchasing properties below market value. His wealth was approximately around $170 billion, which doesn’t seem like much when compared to the wealth of Augustus Caesar ($4.6 trillion).

What’s even more impressive: Augustus Caesar was Egypt’s emperor, which made up around 30% of global GDP at that time. Check out the below infographic and find out more about Crassus, Augustus Caesar, and other successful people you probably don’t know much about. Once you’re done, you might as well check whether trading can make you a rich man nowadays.