How To Track The Sun’s Movements Wherever You Are

It’s been a while since (most) people stopped believing that the sun rotates around the Earth, but if you watch the sun move across the sky, it’s surprisingly easy to see how the myth arose.

Though it’s a cliche, it bears repeating that among all the chaos and discord on the internet, it’s still remarkable how it’s made the world a much smaller, more connected place. If you need to see the weather forecast for a city halfway across the world, go ahead. If you want to look at a sunset 24 hours a day, the internet is there for you. And now, thanks to this beautiful visualization by Small Multiples, you can track the movements of the sun and moon relative to the Earth.

The visualization is a preview for the Hello Sun app, which allows you to track the movement of the sun and moon across the sky of several cities across the world. Here, for example, you can see how quickly the February sun sets in Toronto and how long it stays up in Sydney, given its long summer days. Not only is it mesmerizing to watch, but if it’s beautiful to think that if you have loved ones in other cities, you can now watch the same sky as they do.

The Spectacular Northern Lights – A Thing of Legend

10 Facts About Our Mysterious Moon 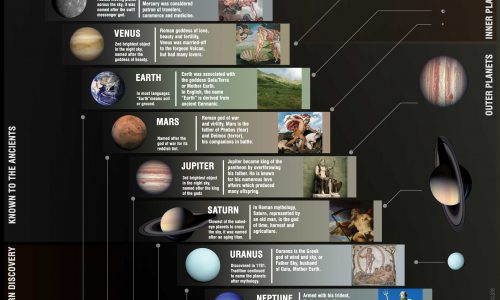 A Visual Introduction To The Planets In Our Solar System