These Are The Most Successful Startups In The World 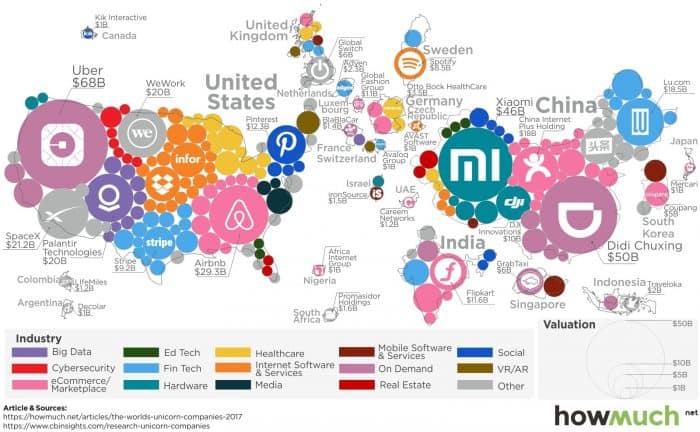 At one point or another, we’ve all dreamed of quitting our jobs and starting our own company.  Being your own boss and working toward a dream of your own is enticing.

Not every small company is successful, but it some startup owners have seen their companies explode. There are currently 214 “unicorns,” or privately-held start ups worth more than $1 billion. While every company that qualifies as a unicorn is wildly successful, some are doing better than others. Tech giant Uber is at the top of the list, with a staggering net worth of $68 billion dollars.

Most of the companies are tech-related, too. Healthcare and real estate both have unicorn companies, but it’s nowhere near the number of successful tech companies.

Taking a look at the map, it’s clear that unicorns are spread disproportionately among countries. The United States and China, the world’s biggest economic superpowers, are home to the highest number of unicorns. In fact, the top 10 most valuable startups all come from either the U.S. or China, and those 10 are have 40 percent of the total worth of all 214 unicorns combined.

Think you can be CEO of the next billion dollar startup? One of the best ways to make sure you succeed is to do something you love. To learn about turning your hobby into a business, check out our post here.