Smart phone users: what is the most frequently-used app on your device? For some people it might be a favorite game or music app, but for many others the answer would probably be Instagram or another photo app.
Since it was launched in late October of 2010, Instagram has exploded (not just in the number of members but the sheer amount of photos taken as well). As of March 2012, Instagram boasted more than 27 million users, a figure that has only grown since then.

Today’s infographic from socialnewsdaily.com goes over the history of the photograph, from its early beginnings to the staple of our society that it is today. The first permanent photo was taken in 1826. It was definitely an accomplishment, but it was in black and white, it was grainy, and it required an 8-hour exposure. Fast-forward to today and there are 26 photos uploaded on Instagram every second of the day. That’s quite a leap!

The extreme availability of cameras and smart phones today has boosted the amount of photos used not just in social media, but for artistic purposes as well. Photoshop is still the preferred method among photographers to alter and edit photographs, but photo-editing apps on phones are being used more and more for their convenience and readiness for immediate use.

For more info on the prominence of photos and Instagram today, refer to the infographic below and have a great week! [Via] 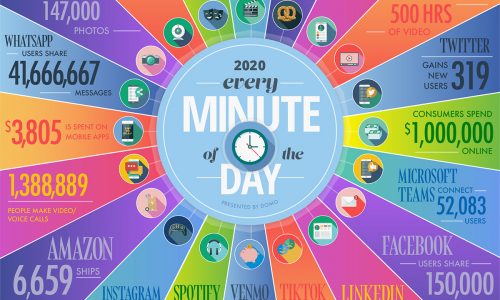 Internet Usage In 2020: The Year We Stayed At Home