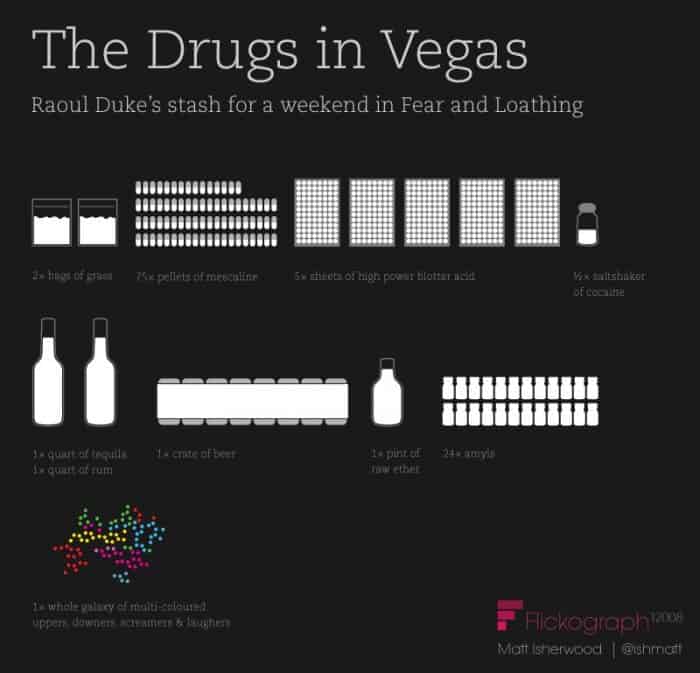 One of the more memorable pieces of literature from the 20th century is Hunter S. Thompson’s novel, Fear and Loathing in Las Vegas.

The novel is rooted in autobiographical incidents and follows journalist Raoul Duke (Hunter S. Thompson) and his attorney Dr. Gonzo (Oscar Zeta Acosta) who experience a wild weekend in Vegas all in the name of the American Dream. The novel is memorable for some of its major themes, from the failure of the 1960s counterculture to the use of drugs as an escape from the realities of American life. The book was later adapted into a film of the same title in 1998, starring Johnny Depp and Benicio Del Toro.

Today’s infographic focuses on Raoul Duke’s stash for the wild weekend depicted in Fear and Loathing. As you can see, Raoul and Gonzo had an absolutely obscene amount of drugs at their disposal during the course of the novel. Some of the highlights include ‘2 bags of grass’, ‘5 sheets of high power blotter acid’, and who can forget ‘1 whole galaxy of multi-colored uppers, downers, screamers, and laughers’.

Now while in no way do I condone abusing drugs like this, this amount of drugs is impressive (albeit in a scary way), especially considering the novel is mostly autobiographical, meaning that these two actually did all of this in real life!

This book has drawn some controversy from some people due to the depiction of vigorous abuse of drugs. If the idea of banned or challenged books is interesting to you, be sure to check out this infographic on banned literature!