A Decade of Elon Musk Tweets | The King of Twitter? 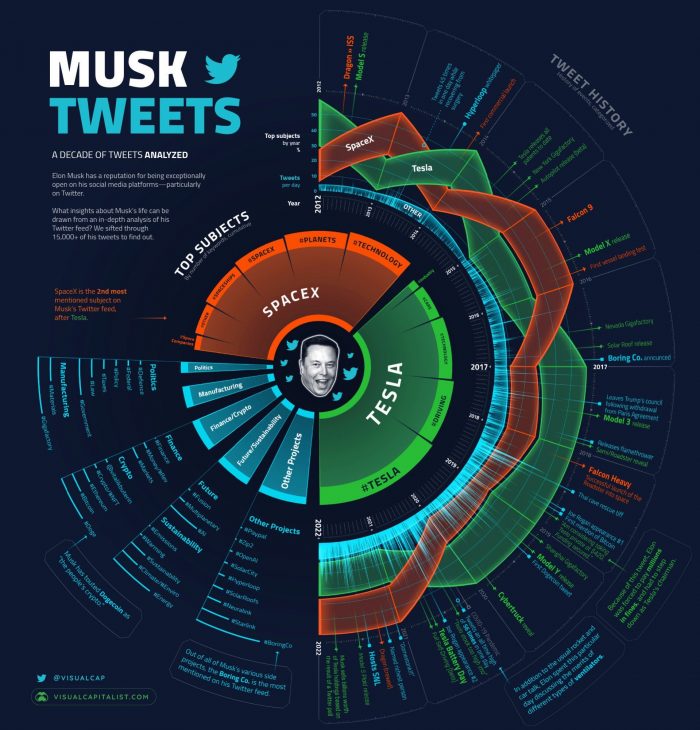 Elon Musk is among the most controversial people on the internet. His best work can be found on twitter where he shares a mix of his thoughts on current events, politics, and some funny memes…

Over the past 10 years Elon Musk has tweeted over 15,000 times. This data visualization displays his most commonly discussed topics as well as a chronology of important events in his life.

Elon Musk is the founder and CEO of two companies, Tesla and SpaceX. In 2021 he became the richest man in the world and has since fluctuated back and for with Jeff Bezos based on the swings of Tesla and Amazon’s stock prices.

Elon’s most common topics are his two companies. Tesla, being the more mature company is his favorite topic to tweet about. He often reveals new features and software updates as soon as they are released via his twitter.

This tweet lead to a years long SEC investigation for securities fraud. The reason for this is that he was alluding to the fact that he had in deed found financial support from an outside investor at the $420 price level, which would make Tesla shares immediately worth more than they were currently trading at.

He has also faced scrutiny from the SEC when he polled his Twitter followers and asked them if he should sell some of his Tesla shares. The results of the poll were that he should sell. He then went on to sell $10 Billion worth of Tesla shares over the next month.