The World’s Population Compared To India’s, In One Map 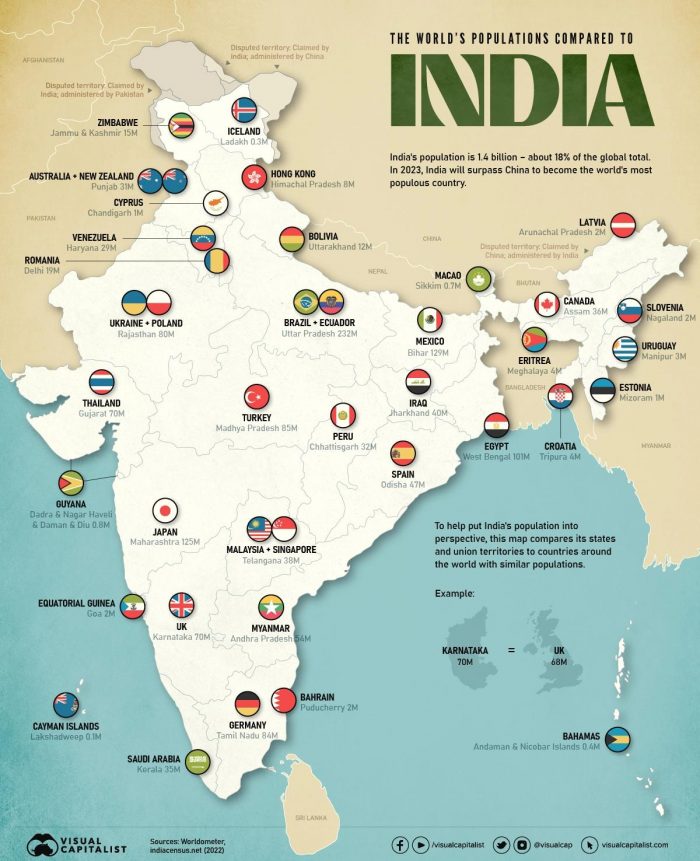 The world’s population is growing rapidly, with nearly an additional birth every second. India is one of the fastest-growing countries in the world, but with only about one-quarter of the world’s population, it wouldn’t take much to tip the scales. India’s population will be 1.69 billion by 2050, according to UN projections. By contrast, China will have a population of 1.39 billion and the US 480 million people by that time. India is a big country. It’s the second most populous nation on Earth, and it has more people than any other country in the world. But how much bigger than India is the rest of the world? And what does that mean for solving global problems like climate change and inequality?

How much bigger than India is the rest of the world?

You’re probably picturing a pretty large number of people. You’d be right—7.6 billion is a lot of people, but it’s not even close to India’s 1.3 billion residents. The world has 5.4 billion people in total, and if you take out the other countries, that leaves the rest with just over two billion inhabitants!

India has almost a fifth of the world’s population

It’s a big country, with almost 1.3 billion people. In fact, India holds 19% of the world’s population! It’s also a densely populated country: 382 people per square kilometer live in India. That makes it one of the most densely populated countries on Earth (only Bangladesh and South Korea are more crowded). And it’s growing fast: The population is growing at an annual rate of 1.2%. By 2050, that number could reach 1.5 billion—a third larger than today!

Our map shows India as a giant, but when you look at it in comparison to the rest of the world, it becomes clear that we are all tiny specks on a planet much bigger than ourselves. The world is full of different cultures and backgrounds, languages and traditions—and we can only imagine what kind of beauty will be created when they all come together in harmony someday soon!