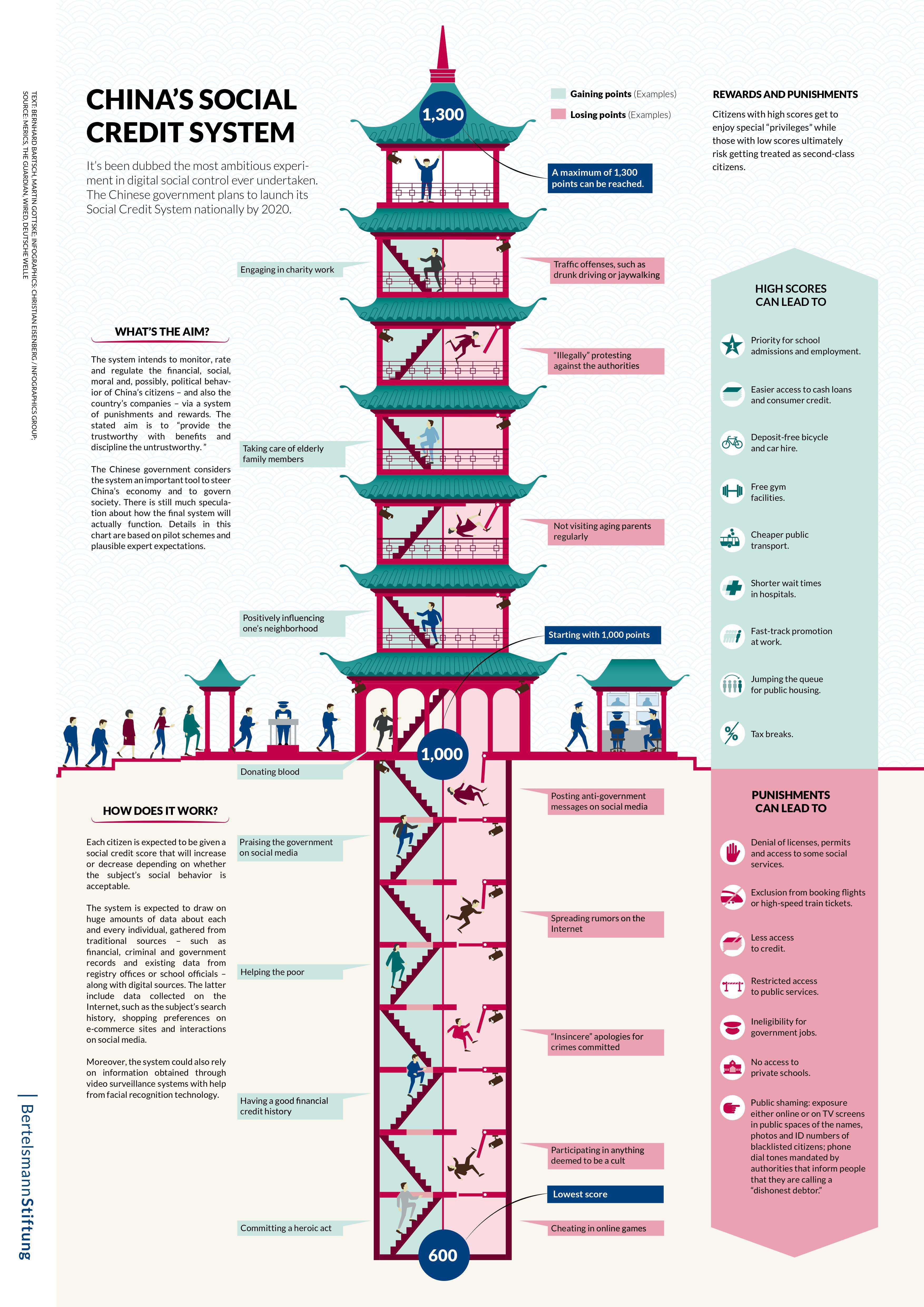 In 2020, China announced that it would be implementing a social credit system whereby individuals and companies throughout the country could increase their “social credit score.” This score aims to keep track of the good and bad deeds of citizens, rewarding those who do good in their communities and punishing those who don’t.

As a new idea, one must wonder: what are the social credit system pros and cons? Will this really excel at promoting good moral behavior?

Below, we’ll explain how China’s social credit system is set up, examples of good deeds and bad deeds, and how each is rewarded or disciplined.

The government trust system aims to keep track of the good and bad deeds of citizens, but how?

The data collected by China for this social experiment primarily comes from digital sources, including interactions on social media, search history, and purchasing habits. Citizens will be monitored according to their actions on the internet, and each will have a chance to affect their credit scores.

Other sources for data include government agencies, information from not-for-profits, criminal records, and financial institutions.

Finally, China plans to use video surveillance — which is already in place — to monitor an individual’s actions in the real world. They’ll use advanced facial recognition technology to track people as they move through and interact with the world around them.

What Deeds Affect Your Credit Score?

Each citizen’s score begins at 1,000, but there are many different deeds that can increase or decrease it from there. The maximum score is 1,300, and the minimum score is 600. So, what acts bring you closer to these extremes?

Since the Chinese government and tradition have long been focused on civil duty, many of the deeds are related to how one pays their debt to society.

Good deeds that increase your social credit system standing include donating blood, doing volunteer work, taking care of the elderly, and safe driving practices. Purchasing books instead of video games and dedicating time to schoolwork are also examples of how to increase one’s score.

Bad deeds that decrease your social credit standing include not paying your debts, unsafe driving, posting anti-government content on social media, spreading rumors, infidelity, and buying too many video games.

What Are the Consequences?

The higher your social score, the more perks you enjoy; the lower your score, the more detriments you must deal with. Below are some of the common ways the Chinese government aims to reward and discipline citizens who have high and low scores, respectively.

How Are Good Deeds Rewarded?

Good deeds aren’t rewarded directly. Instead, those citizens who have a high score — indicating a larger number of good deeds than bad — enjoy a variety of benefits.

Perks include decreased electric bills, access to universities and higher education, easier access to public housing, free gym access, and a higher chance of securing a loan. Some citizens with high scores also enjoy lower public transportation costs and tax breaks, as well as no requirement for a deposit when booking hotels or travel reservations.

China is ranked as one of the world’s most miserable countries, so putting these perks behind good deeds may increase overall positivity for citizens.

How Are Bad Deeds Punished?

When citizens drop below the starting score of 1,000, they become more likely to be punished for their bad behavior.

Citizens with low scores may not get equal access to public amenities or social services, and they are less likely to be approved for loans.

In some cases, the punishment fits the crime that brought the individual’s social credit system score down. For example, some people have had their dogs confiscated if they lost points by walking their pets without a leash or failing to pick up after them.

Some of the more extreme cases have resulted in public shaming on television, social media, billboards, or elsewhere on the internet. The government has been known to post the names and pictures of “dishonest debtors” for all to see.

There are many upsides and downsides to a system like this, and the implementation and morality of such a system has been questioned since it was announced. Below are some of the pros and cons of China’s social credit system.

It’s Not Just for Individuals

China has implemented a separate commercial credit system for companies throughout the country. The deeds, benefits, and punishments are different for businesses, but the idea remains the same.

Basically, companies are rewarded for following the rules, regulations, and policies that govern their line of work. Similarly, businesses are punished for ignoring them.

Rewards for good company behavior include fewer inspections, lower taxes, and reduced restrictions at customs. Punishments include monetary penalties, more frequent inspections and audits, and even being blacklisted.

Wrapping Up: Is The System Working?

China’s social credit systems aren’t fully implemented yet. The start of the program took place in 2020, and China plans to make the system mandatory for individuals and companies over the next few years.

There have already been reports of improved social behavior from Chinese citizens and businesses, including safer driving, an increase in blood donations, and more charitable work.

Those opposed to the system — particularly sources in western media — have called the system something straight out of a dystopian society in a sci-fi movie. Some have said it’s a harrowing example of how “big brother” should not operate, regardless of whether such a system works.

It remains to be seen whether Chinese society ultimately benefits from this system, but proponents are hopeful that it will bring about positive change.