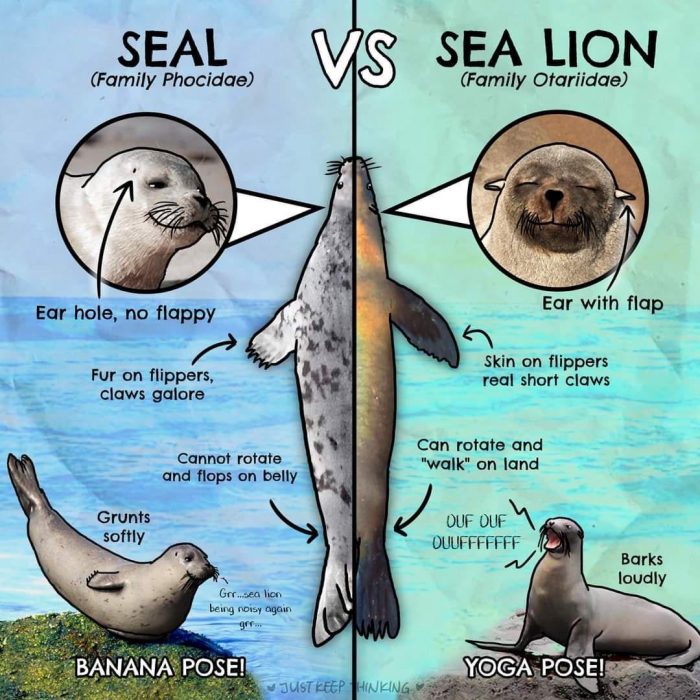 Seals — also called fur seals or harbor seals — and sea lions are marine animals that, together with walrus, belong to the taxonomic suborder of pinnipeds (which loosely translates to “fin-footed”).

Is a Seal the Same As a Sea Lion?

At a glance, seals and sea lions look very similar in terms of body shape and color, but they are distinctly different animals. Some physical characteristics and social interactions can be used to tell them apart.

Differences Between Seals and Sea Lions

Below are the most notable differences between fur seals and sea lions.

Seals do not have external ear flaps but instead have ear holes on both sides of the head. You have to get fairly close to see the tiny ear openings. On the other hand, sea lions have visible ear flaps protruding from their heads.

You can easily differentiate seals and sea lions by their vocalizations if you’re close enough to hear them. Seals are quiet and communicate using soft grunts. To emphasize, they accompany the soft grunts by slapping their fins on the water. However, seals are generally pretty quiet.

Sea lions, on the other hand, bark loudly and often. When they are upset or bothered, the barking and grunting is very loud and noticeable.

Movement Above the Water

Seals have shorter fore flippers covered by fur with long claws. They also have hind flippers which cannot rotate under their bodies.

On the other hand, sea lions have longer front flippers with very short claws covered by hairless skin. They also have hind flippers that rotate under their bodies to use for more effortless maneuvering. The difference in flipper style influences the way these animals swim and walk on dry land.

Although seals are faster than sea lions in water, they struggle on land because they can only move by wiggling on their tummies like a caterpillar. Sea lions are able to walk onshore more easily by rotating their back flippers under their bodies. The walking ability of sea lions makes them better candidates for aquarium and marine shows in most cases.

Seals are typically less social than sea lions. They spend a lot of their time in water, hunting or swimming in solitude. They are less likely to spend time in groups and rarely touch except for mothers and newborn pups. Additionally, they come onshore once a year to meet and mate. Aside from these interactions, they prefer to be alone.

On the other hand, sea lions are very social and love spending time together both in water and on land. Depending on the species, sea lions bask in small groups or large “communities” with thousands of sea lions around them. They also touch frequently and pile on each other on the sand or rocks.

While both animals spend their time in water and on land, seals are more adapted for life in the water. Although they appear chubbier than their sea lion cousins, their bodies are smaller and more streamlined, with hind flippers angled backward to propel them forward. This makes seals much faster in water.

Additionally, they have a thick layer of fat under their skin to keep them warm underwater, so their better adapted for marine life in general.

On the contrary, sea lions are better adapted for life onshore. Their hind flippers rotate forward and function like feet, and they use their rear flippers as back legs to move more freely. Sea lions live partially in the ocean but come on land for long periods of time.

Size: How Big Is a Seal Compared to a Sea Lion?

Sea lions are generally much bigger than seals.

The average weight of a common male seal is about 300 pounds, and they reach up to around 6 feet long. In comparison, male California sea lions can weigh 700 to 800 pounds. These ocean giants can measure up to 8 feet long.

Do Seals and Sea Lions Have Fur?

Both seals and sea lions have fur, but sea lions tend to have thinner fur and massive amounts of blubber for insulation in the water. This is unlike fur seals which rely more on thick fur that traps air to keep them warm.

Sea lions are carnivores that feed on fish, crabs, and clams, but they do not prey on seals. Sea lions swallow most of their food without chewing, making it hard to feed on a seal because they are almost the same size. They fight for territories now and then, but the fights do not result in fatalities most of the time.

However, Steller sea lions kill seals. This is one of the largest species of sea lion and is known to eat small seals. Unfortunately, this is considered an endangered animal.

Are Seals and Sea Lions Both Mammals?

Yes, seals and sea lions are both marine mammals. They live in the ocean but come on land to mate and bear live young. They give birth and feed their young ones with milk.

Seals and sea lions are marine mammals with different physical features, socialization skills, and adaptations. Seals are smaller and spend most of their lives hunting and surviving alone in the cold ocean waters. On the other hand, sea lions are massive, can quickly move on land, and spend a lot of time on shore.