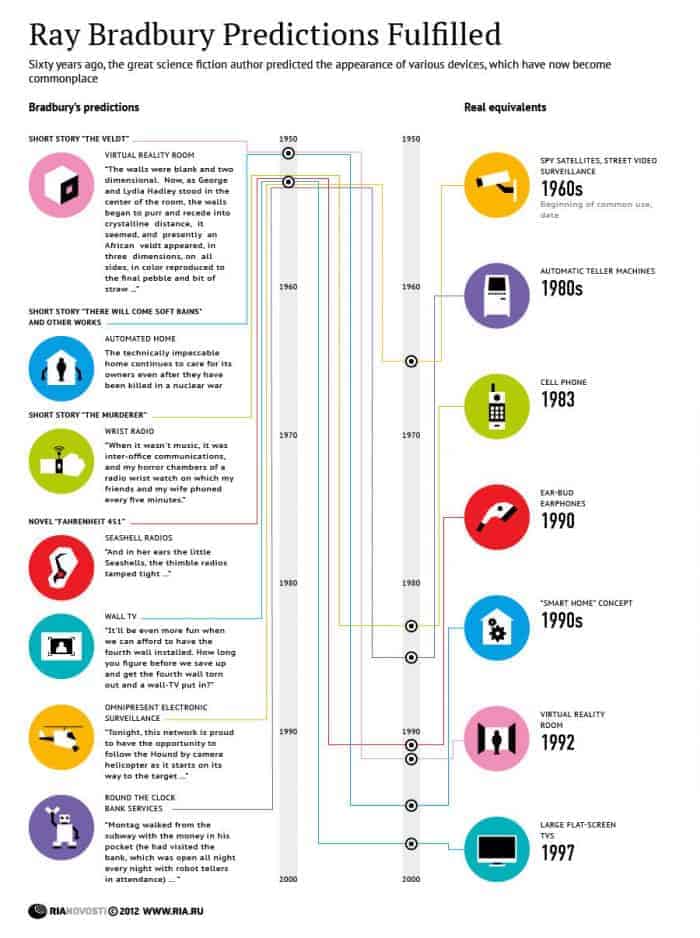 We lost a great man this year. Not only has Ray Bradbury written some of the best science fiction stories of the last century, he’s also been a trend setter of sorts. I’m not saying that Mr. Bradbury was a hipster, though it’s pretty great to imagine Ray relaxing to some obscure dark wave bands and wearing cut off corduroys with ray-bands, brainstorming a short story… He was however, an idea man who created devices within his stories that have since predicted many of the common technologies that we use today.

Much like Jules Verne, who predicted such technologies as the submarine and lunar modules, Ray Bradbury has continued the great tradition of sci fi writing prophecy which has sparked our imaginations so deeply that we have manifested many of these same objects within our own reality. Things that Mr. Bradbury has imagined have had social and technological implications as much as 40 years in advance of their physical manifestations. Stuff like ATMs, cell phones, ear bud headphones, smart homes, video camera surveillance, and flat screen tvs all were imagined in Ray Bradubury’s stories. It’s amazing how art often informs society as much as society informs the art. To read one of Ray Bradbury’s books or short stories is to take a deep look into the human condition and its evolution with technology. Highly recommend reading his novel Fahrenheit 451 as well as short stories “Frost and Fire” and “A Sound of Thunder”. RIP Ray… [via]