What are The Most Popular Halloween Costumes in 2021? 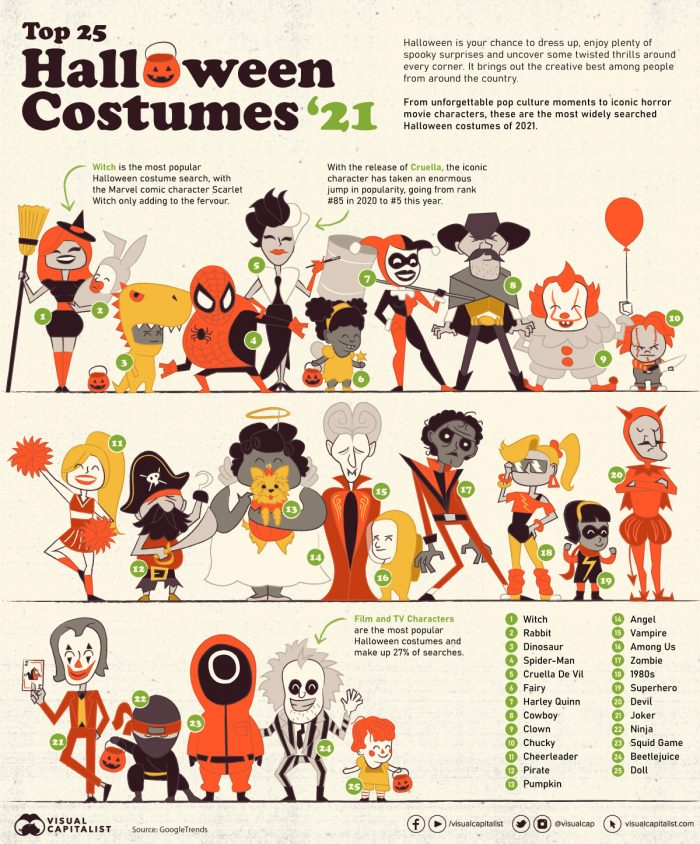 This data is from google search volume in 2021 and paints an interesting picture. Many of the top costumes are timeless Halloween favorites like the #1 overall most popular…a witch.

You can see the list if heavily skewed by the fact that most of the people dressing up for Halloween are kids. Rabbit and Dinosaur (which is what my 2 year old son is going to be this year) come next on the list.

While it’s fun to keep an eye on the classic costumes and see where they rank, I find it the most interesting to see the new entries on the list.

While this is a classic costume, the renewed interest in it this year is likely due to the release of the new Disney movie Cruella.

Harley Quinn has been a popular costume for the past handful of years due her increased visibility on the big screen. She is an iconic character with plenty of physical traits that make her a great candidate for a Halloween costume.

Among Us is a super popular video game. It was released in 2018 but has gained popularity in the last 2 years. A group of people try discovering which among them is the imposter. The characters are bright colored and quite distinct looking, making them a great costume choice.

Squid Game is a recent Netflix series and will likely end up as one of the most streamed shows of all time. It is a Korean series which pits down on their luck gamblers and criminals against one another in a fight for survival. I expect to see plenty of these costumes this year.