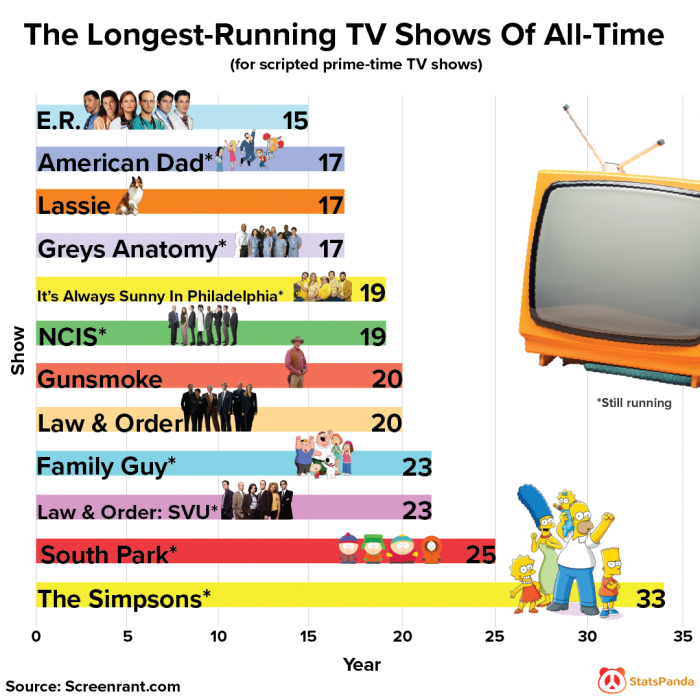 Here are the 12 longest running TV shows of all time. Some of the shows on this list may surprise you…

The show began as a series of shorts done for Fox before Comedy Central picked it up for a full series in 1997. Since then, South Park has become one of the most critically acclaimed shows on television. It has received many accolades including five Primetime Emmy Awards, a Peabody Award, and numerous nominations throughout its run.

Law & Order: SVU is a spinoff that focuses on sex crimes, with the acronym standing for Special Victims Unit. It first aired in 1999 and was intended to be a temporary series until Law & Order ended, but it has proven successful enough to last much longer than expected.

Though Fox canceled the series twice during its early years due to low ratings—the first time after just three seasons in 2002—Family Guy was revived in 2005 following strong DVD sales and extremely high ratings on adult swim. The show’s revival became such a blockbuster hit that it’s now considered one of the most successful TV revivals of all time.

Law & Order, from NBC, is the longest-running crime drama in the history of television. The series follows a pattern: criminal investigation, followed by trial preparation and court proceedings. Created by Dick Wolf in 1990, Law & Order has become an institution on television and has spawned multiple spin-offs set in different cities and settings.

The show was nominated for more than 60 awards during its run, including two Golden Globes and four Primetime Emmys.

Spanning 20 years on the air and 636 episodes, Gunsmoke is one of the longest-running TV shows in history. It stars James Arness and Milburn Stone as a U.S. Marshall and his assistant respectively, who work with law enforcement officials to keep the peace in a small Kansas town. Each episode follows a “crime of the week” format from either a criminal or victim’s perspective; themes include gambling, con artists, revenge and more.

Gunsmoke debuted on CBS in 1955 and was well received by both critics and audiences alike due to its level of realism at that time – something which hadn’t been seen before on television Westerns. The show ran until 1975 when it ended after 15 seasons due to declining ratings.