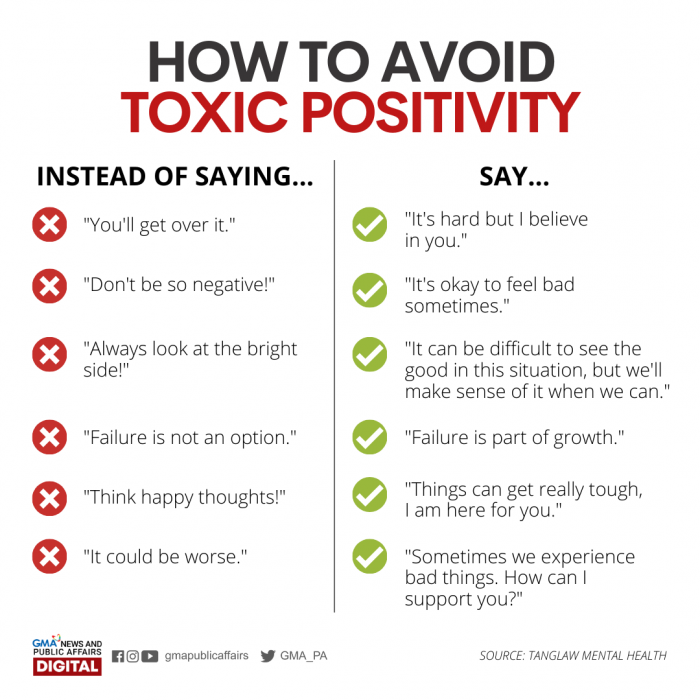 If you’re ever tempted to call yourself “a glass half-full kind of person,” be sure you’re not actually just an optimist. There are two kinds of people in this world: those who see the world as a place where they can strive toward their goals and get what they want, and those who see it as an obstacle preventing them from doing so. The former attitude is healthy; the latter will lead you down a dark path of self-doubt and self-sabotage.

What is toxic positivity?

How to avoid toxic positivity

Avoid the “fake it till you make it” mentality. One of the most common things I see in people who struggle with depression is that they’re afraid to admit that they are struggling, or even worse, they’re ashamed of how they feel. Even though everyone goes through periods where they are depressed and sad, we place a lot of importance on being happy all the time. We have an idea that if we show our true feelings to other people, then we will be considered weak or vulnerable.

We need to realize that showing weakness doesn’t make us any less human; in fact, it only makes us more relatable and real! Not only should you never feel guilty for feeling down sometimes (especially as someone suffering from mental illness), but also realize that your feelings aren’t something you should hide from others either. In fact, sharing with others could help them understand what’s going on inside your head better than anything else could!