Town Names That Will Make You Fall Out Of Your Chair 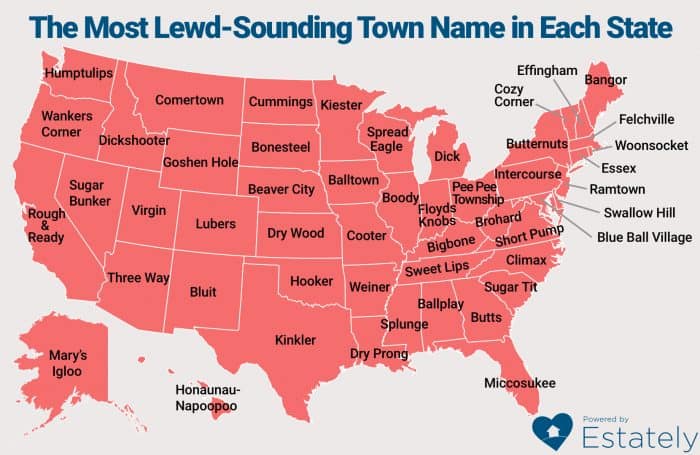 Naming something or someone is always a hard task. It’s just seems so..permanent.The strange thing about this is that we, humans, are probably the only species in the known universe (if there is nobody out there) that does these sorts of things. We have a name for every person, town, lake, river, patch of land, building, and so on. But the even stranger thing is some of the names we have given.

Kids, dogs, and other pets, I won’t comment. Those are personal decisions that people make and it is completely up to them. But what I found out from this infographic is that some of the cities in the US , have, let’s say old fashioned names. Not sure if it’s sheer coincidence none of them made it to a list of the fastest growing cities in the US.

Some of these names could probably be interpreted in many ways, so where did they  come from?  Well according to Wikipedia, Sugar Tit, NC was so named because men spent so much time socializing at the general store, their wives complained that men took to the store like a baby to a sugar tit.

A what?  Well a sugar tit actually refers to a baby pacifier that was dipped in sugar that used to be quite popular.  Oh the things parents will do to stop a baby crying.

These names are a good reminder of how while times change, some things still remain the same.