The 10 Best Selling Music Artists Of All Time 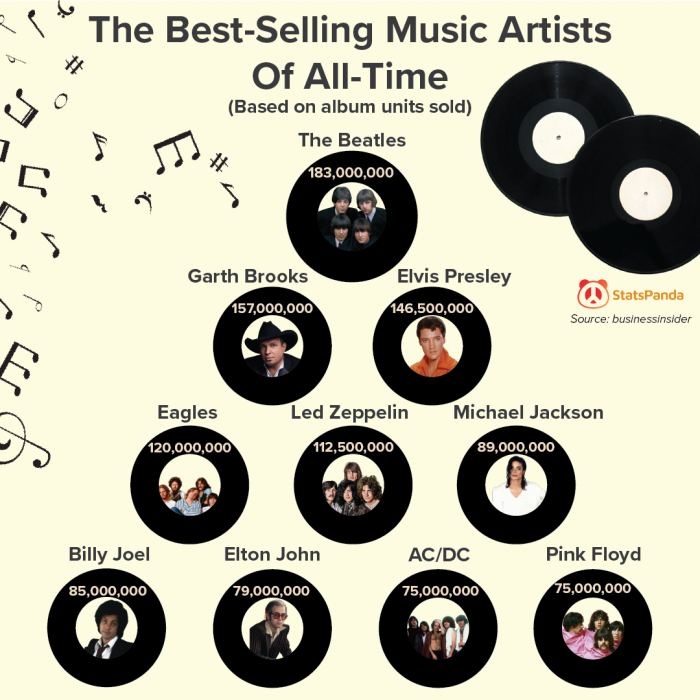 It’s confirmed: The Beatles are the best-selling band in history, with estimated sales of over 800 million physical and digital albums worldwide. They’re arguably the most famous band to ever exist, and they’ve also been getting a lot of attention lately due to their music being available on streaming platforms like Spotify for the first time ever.

In case you need a refresher, we’ll remind you that The Beatles consisted of John Lennon, Paul McCartney, Ringo Starr and George Harrison. When it comes to the best selling music artist of all time, you probably wouldn’t be surprised to learn that *The Beatles* are at the top of the list. With over 600 million records sold worldwide in their heyday, The Beatles are undeniably the biggest band in music history. From being awarded the most no. 1 hits on Billboard magazine’s Hot 100 singles chart with an impressive 20 songs reaching the top spot, to having more gold records than any other artist (with 28), and winning a total of 15 Grammy Awards for their work, The Beatles have been making an impact on popular music since their debut 50 years ago.

An icon, a national treasure, and a man who’s sold 156 million records worldwide—Garth Brooks is one of the best known and most beloved country music artists in the world. His career began in 1989 with his self-titled debut album, but it was his second studio album No Fences that sent him into super stardom. The album has become certified diamond by the RIAA for having moved over 10 million copies worldwide. The single “Friends In Low Places” became one of the highest selling singles of all time, as well as being named as one of Rolling Stone’s Top 100 Country Songs of All Time.

Elvis Presley is second in album sales, with over one billion records sold. Even more impressive, however, is the number of singles he sold—over 600 million. While most artists sell a few hundred thousand copies of their albums and a few million singles, Elvis managed to shatter all expectations for the music industry. The King of Rock and Roll reigned supreme decades after his death in 1977 due to iconic hits like “Jailhouse Rock,” a song that perfectly captured his rebellious nature; it was also featured on the soundtrack for An American Werewolf in London as well as multiple films from Quentin Tarantino.

There are some bands that you just can’t help but know. Formed in 1971, the Eagles have sold more than 100 million albums worldwide, which makes them one of the world’s best-selling bands of all time. The band has released six number one albums and five number one singles, earning two Grammy Awards for Hotel California and New Kid in Town.

If you’re not familiar with Led Zeppelin, the legendary rock band, let me tell you a little bit about them. This iconic group was founded in 1968 by Jimmy Page and consisted of Robert Plant on vocals, John Paul Jones on bass and keyboards, and John Bonham on drums. Led Zeppelin is one of the best-selling musical artists of all time. They sold over 300 million records worldwide, including 111.5 million certified units in the United States alone. Led Zeppelin is arguably one of the most influential rock bands of all time, even though they only released nine studio albums during their twelve year career.

Michael Jackson has a total of 13 records in the top-40 best-selling albums. His three best-selling records are Thriller, Bad, and Dangerous. He sold over 66 million copies of Thriller. In 1982, he released the record Thriller and earned himself eight Grammys. The album is still one of the biggest selling albums of all time. Along with Bad and Dangerous, all three have gone Diamond (meaning they have sold over 10 million units).

You can’t talk about the best-selling music artists of all time without mentioning Billy Joel. The Piano Man, as he is affectionately nicknamed, is one of the most recognizable artists in American history. He first hit the scene in 1973 with his debut song “Piano Man,” which quickly became a chart-topping hit. Since then, Joel has gone on to release many more hits, including “Uptown Girl,” “We Didn’t Start the Fire,” and “It’s Still Rock and Roll to Me.” He has been nominated for 23 Grammy Awards and won 1 award in 1990 for Best Male Rock Vocal Performance (for his song “Downeaster Alexa”).

Elton John is the best-selling solo artist in the history of classical music, with career sales of over 200 million records. He has earned five Grammy Awards, four Brit Awards, an Academy Award and a Tony Award. He was inducted into the Rock and Roll Hall of Fame in 1994. Induction in both the Songwriters Hall of Fame and UK Music Hall of Fame followed, as well as being a Disney Legend award recipient. In 2004 he received an Academy Award for The Original Score for Aida, which was composed by himself along with Tim Rice. Elton John’s net worth currently stands at $350 million (2018).

You may (or may not) know that Pink Floyd is an English rock band formed in London in 1965. The band achieved international acclaim with their progressive and psychedelic music. Did you know, though, that Pink Floyd is one of the best-selling music artists of all time? It’s true! According to the RIAA, they’re tied at number four with Eagles. Pink Floyd have sold more than 250 million records worldwide, including 75 million units sold in the United States. The group has earned 15 Grammy Awards, a Grammy Lifetime Achievement Award, and was inducted into the Rock ‘n’ Roll Hall of Fame in 1996. They were also awarded a star on the Hollywood Walk of Fame in 2002.

Wrapping up our list of the 10 best selling music artists of all time is AC/DC, a household name for hard rock fans across the globe. With over 200 million albums sold, these Aussies are definitely worthy of their spot on this list. Their first album was released in 1974, and since then they’ve produced 16 studio albums featuring songs like “Highway to Hell,” “Back In Black,” and “Thunderstruck.” The latter two are considered some of the greatest hard rock songs ever made.

So why is AC/DC so popular? One reason is that they were one of the first groups to really make hard rock a thing, paving the way for many future groups in the genre. In addition to having talented players and songwriters in Bon Scott (lead vocals), Angus Young (rhythm guitar), Malcolm Young (lead guitar), Phil Rudd (drums) and Cliff Williams (bass), their sound has always been consistently good—so much so that any number of people could replace Scott after his death in 1980 and it wouldn’t make too much difference.